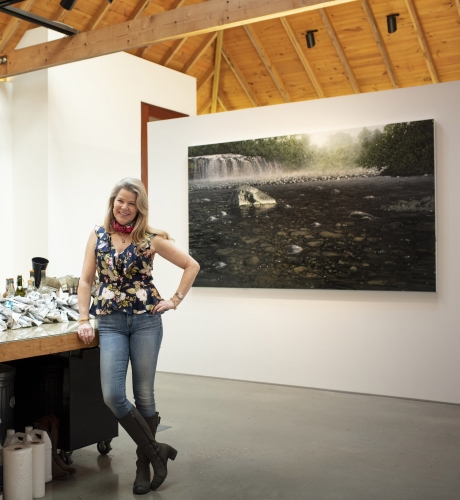 Tula Telfair in her studio in Old Lyme, CT
Photograph by Paul Horton

Tula Telfair spent her childhood in West Central Africa. A grant recipient and graduate of Moore College of Art in Philadelphia, Ms. Telfair then became a graduate fellow, receiving her Masters of Fine Arts degree from Syracuse University. In 1989, She was hired as an Assistant Professor of Art at Wesleyan University in Middletown, CT, where shortly thereafter, she became Chair of the Department of Art and Art History, and then Acting Academic Dean of the Arts and Humanities. She currently serves as a full professor of Art.

Ms. Telfair has exhibited at galleries in Chicago, Philadelphia, New York and Connecticut and her paintings have been included in Museum exhibitions throughout the United States. Hers is a progressive art, a continuous exploration like each individual painting. The works might seem to contain the panoramic observations found in 19th Century American landscapes, depictions of awe-inspiring locales the artist has visited. In actuality, her worlds are invented vistas, fully contemporary in their inspiration and execution, exceptional realizations of a conceptual world.