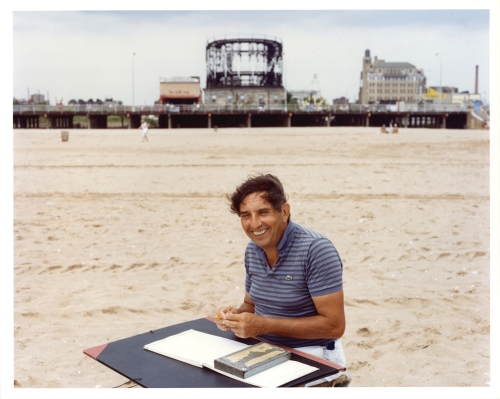 David Levine on the Beach at Coney Island

With deep regret, Forum Gallery notes the passing of David Levine on December 28, 2009. His contribution to the arts was extraordinary.

An obituary appeared in the December 29, 2009 New York Times.

David Levine was born in Brooklyn, New York in 1926 and studied at the Brooklyn Museum of Art School, Pratt Institute, the Tyler School of Art at Temple University in Philadelphia and the Eighth Street School of New York with Hans Hoffman. One of America’s most celebrated artists, David Levine’s many awards began with the Louis Comfort Tiffany Foundation Award in 1955 and have included the Isaac Maynard, Julius Hallgarten and Thomas B. Clarke awards, all from the National Academy of Design; the George Polk Memorial Award, a Guggenheim Fellowship, the Childe Hassam Purchase Prize (American Academy of Arts and Letters), the John Pike Memorial Prize and the Gold Medal of the American Academy and Institute of Arts and Letters in 1993. Internationally, David Levine has received the French Legion of Honor award and the Thomas Nast Award in Landau, Germany.

David Levine exhibited with the Davis Gallery in New York from 1954 to 1963, when he joined Forum Gallery. In addition to the numerous one-person exhibitions he has had at Forum since then, David Levine has had exhibitions in Paris, Stuttgart, Washington, Munich, Oxford (England), Beverly Hills and Columbus, Georgia.

Six books have been published of David Levine’s art, including The Arts of David Levine (Knopf, New York, 1978) and Pens and Needles (Gambit, Boston, 1969).