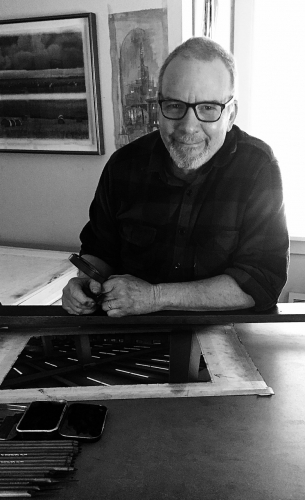 Anthony Mitri's meticulous, life-like charcoal drawings, executed with exceptional patience and skill, include portrayals of the French countryside, urban Paris and New York City, subjects drawn from in and around his home town of Cleveland, Ohio, as well as other, diverse subject matter. Each charcoal is the representation of a personal, emotional experience bound to the location depicted.

Photographs, which Mitri takes at each location, help him recall his time spent in such places.  These images also serve as guidelines, enabling him to outline the compositional elements of his subjects by way of an under-drawing, after which lighting and the creation of an appropriate mood become his primary focus.

More than photographs, however, Mitri’s own indelible memories of each location serve as his primary source material.  This could include certain sounds and smells, as well as all the related circumstances in his life which colored his perceptions and influenced his emotions at that particular time and place.

The artist has said that “The experience of having been there is crucial to these pictures; the process of rendering a drawing becomes an extended moment of memory, the finished piece, a memoir in charcoal”.  In describing his feelings about the work, Mitri quotes the poet William Wordsworth who wrote of an “emotion recollected in tranquility”.

Mitri attended the Cooper School of Art in Cleveland, Ohio and went on to the Athenaeum School of Fine Art in La Jolla, California. Since then he has been the subject of numerous one-person exhibitions in New York City, Los Angeles, San Diego, Nashville, and in Deauville, France. Forum Gallery has held two, one-person exhibitions of Mitri's work (2007 and 2013). His work has been included in countless group exhibitions and art fairs, examples of which can be found in the permanent collection of the Arkansas Arts Center, as well as numerous private collections throughout the United States and Europe. He is the recipient of two Adolph and Esther Gottlieb Foundation Grants (2010 and 2013), two Pollock-Krasner Foundation Grants (2006 and 2013), and is included in the Pollock-Krasner Foundation Grantee Image Collection.